Back in the trailer with his dog Sam, dressed and ready for work.

Riggs responds to the sniper call to dispatch.

Takes a few shots on the sniper, killing him.

Riggs silently walks away from the scene.

Pays them in small amounts of cash.

He reveals to them why he is really there.

Having had enough, Riggs disarms the drug dealer and holds him for himself.

With the pistol loaded, Riggs points it on his forehead and attempts suicide.

Now he tries to go for the mouth.

Riggs in the police station.

Riggs sees a cop charging at him, mistakening him for a crook.

Riggs munches on a hot dog while Murtaugh holds a Pepsi can.

They continue to eat and drink on the way back to the car.

"Do you really want to jump?! Do you want to? Then that's fine with me, pal!" 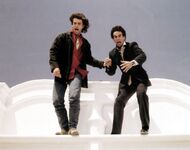 Riggs gallantly pulls McCleary down with him after debating.

Shows Murtaugh the bullet he attempted suicide with the other day.

Riggs proves to Murtaugh he is suicidal.

The duo arrive at the suspect's home for questioning.

Riggs comes out of the pool, wet and soaked, after failing to save the suspect from drowning.

Riggs wakes up Roger Murtaugh through the smell of coffee.

Riggs takes his turn to shoot after Murtaugh.

Martin Riggs' aim is more accurate than Murtaugh, he shot out a smiley face.

Riggs keeps firing at the helicopter until his magazine is empty.

Both cops can now only watch as the helicopter escapes.

Riggs and Murtaugh point their guns at who they thought was a burglar.

Riggs runs for a hiding spot in El Mirage Lake.

Hides armed with a sniper rifle while Murtaugh drives to confront his daughter's kidnappers.

Riggs gets electrocuted by Endo.

After Joshua leaves, he overpowers Endo and strangles him to death.

Takes one of the henchmen's guns and shoots a few who remain.

"What do you say, Jack? Like a shot of the title?" ~ Riggs challenging Joshua to a duel

The two battle it out on Murtaugh's lawn.

Riggs now gets the upper hand as he holds Joshua on the ground.

Riggs has Joshua in triangle chokehold

"Merry Christmas, Victoria Lynn. I love you." ~ Riggs at Victoria's grave
Add a photo to this gallery

Martin Riggs has fun while Roger Murtaugh drives his wife's station wagon on pursuit of the suspect.

Riggs and Murtaugh stumble upon the krugerrand in the suspect's car

Riggs and Murtaugh discover the gold in krugerrands

Both cops are startled by the noise of the nail-gun, they mistaken it for a gunshot.

Riggs and Murtaugh watch as the suspect escapes.

Riggs in a bathrobe following the failed apprehension.

Riggs chases the escaping suspect on his getaway truck.

Riggs and Murtaugh attempt to arrest the South African diplomats.

Despite their criminal offences, Riggs discovers Rudd and his men have diplomatic immunity so they cannot be arrested.

"You got me quaking in my boots, but I'm still going to nail you." ~ Riggs swearing to put the quack on Rudd and Vordstedt

Begins to show his disgust towards Arjen Rudd.

Riggs gives the briefcase to Rika after she dropped it after meeting him.

Riggs tailing Rudd at the consulate

Riggs gets a call from another cop about Murtaugh not answering his house phone.

Riggs pulls Murtaugh into the bathtub in order to save him.

"Well, as usual, you people have everything all upside down and turned around and back to front."

Riggs warns the henchman to take his hand off the gun.

Riggs flirts with Rika and persuades her to have dinner with him at his place.

Riggs has some beers with Rika.

Riggs tells Rika her boss isn't a very nice guy, with her knowing Rudd is up something.

Riggs being told by Rika he could stay with her.

Riggs cradling Rika's body while pacing along the beach.

Riggs going after the South African diplomats as it is personal to him now.

Murtaugh begs Riggs not to die.

"Don't make me laugh!" ~ Riggs and Murtaugh after the bad guys have been defeated
Add a photo to this gallery

Martin Riggs goes inside the ICSI building to disarm the bomb, but Roger Murtaugh tries to stop him.

Riggs and Murtaugh discover a bomb in the car.

"Oops." ~ Riggs discovers the bomb squad had arrived on time.

Riggs and Murtaugh as patrolmen.

Riggs and Murtaugh apprehend one of the suspects impersonating armored car drivers from the foiled robbery.

Murtaugh and Riggs are in the elevator going to interrogation.

Martin Riggs and Roger Murtaugh attempt to interrogate Billy Phelps but are prevented from doing so by Lorna Cole.

Riggs and Murtaugh are able to learn from Leo where Jack Travis may be.

Riggs orders Gang members of Tyrone to put their hands up.

Riggs watches as Murtaugh attempts CPR on Daryl to no avail. 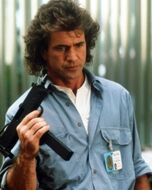 Riggs and Lorna agreeing to partner up in finding Travis' arms dealing hideout.

But they are both confronted by a guard dog.

Riggs and Cole escape with the reconfiscated firearms.

Riggs watching "The Three Stooges" with Sam and his new dog, the Rottweiler.

Riggs visits his partner, who now lives in isolation in a houseboat away from family.

The trio at Daryl's funeral. 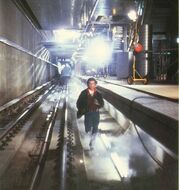 Despite Travis escaping via pickup truck, Riggs still decides to give chase on foot, like he did in a previous encounter.

Riggs loses his grip and falls through the wooden planks.

After suffering the fall, both Riggs and Murtaugh figure out what to do next.

Martin Riggs now in a bloody hot fiery shootout.
Add a photo to this gallery

Takes aim in the rain.

The duo after the boat has been impounded by the police.

Riggs walks with his fiancé Lorna to the beach.

Riggs vows he won't tell Roger that Rianne is married to Lee Butters.

Riggs and Murtaugh joke around about their promotion to Captain.

Riggs attempts to interrogate one of the Chinese henchmen who may know where the Hongs are.

The cops reveal to the Chinese General, the money is counterfeit.

The battle now goes into the water.

Underwater, The Killer kill Riggs grabs an AK-47 nearby.

Riggs visiting the grave of Victoria.

Riggs with his family from over the years.
Add a photo to this gallery
Retrieved from "https://lethalweapon.fandom.com/wiki/Martin_Riggs/Gallery?oldid=11477"
Community content is available under CC-BY-SA unless otherwise noted.