Mr. Mendez meets with Mr. Joshua in the basement of a private club.

With his boss General Peter McAllister.

Mr. Joshua showing his strength by putting a lighter to his arm.

Joshua takes over the ordeal with Roger Murtaugh. 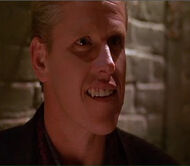 Talks to Martin Riggs in the basement of his hideout.

Interrogates Riggs into giving him details of the shipment.

Joshua escapes in a stolen car.

"Goddamn Christmas!" - Joshua shoots the TV showing his hatred of the holidays.

After being patted down by Murtaugh, Joshua accepts Riggs' challenge.

After getting covered in water, Joshua gets intense as the battle progresses.

Riggs now gets the upper hand as he holds Joshua on the ground.

Joshua gets incapacitated in a triangle choke hold by Riggs

Joshua's death.
Add a photo to this gallery
Retrieved from "https://lethalweapon.fandom.com/wiki/Mr._Joshua/Gallery?oldid=11967"
Community content is available under CC-BY-SA unless otherwise noted.